just a girl that works on things sometimes :]

what if we all decided to install and start using windows 7 again. microsoft can't stop all of us

This nice-looking, very "70s PNW" office building has apparently been sitting empty for the last few years in Federal Way. You can see it from the freeway.

wowie! prolly a much shorter post today. i poked at a couple things over the weekend! there were two main tasks i wanted to tackle and i did em. lets view the works

it's not especially obvious because both rooms are visually similar, but the smaller square room with the venusaur & ball is a separate room from the large multi-view room. so, how do we get between them?
enter Door's, a way to move between rooms and set ~destination info~ when the player gets there. 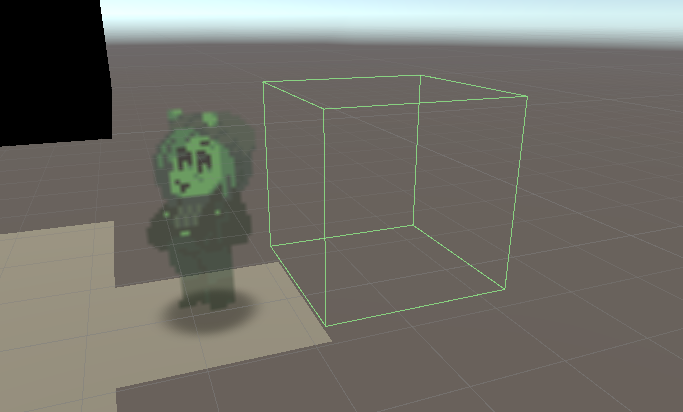 they're pretty simple - just a short script, a box collider, and a little placeholder graphic for where the player will appear when entering via this door. each door has a "target room" and "target door" variable that tells it where to send the player when you walk into it. i was prepared to put together a custom editor to have nice little dropdowns that autopopulate with available rooms and their doors, but as it turns out, someone already put together an asset for generating dropdowns easily without having to put together a custom editor from scratch.

so i just used that! this editor asset grabs info from my room db and spits out yummy dropdowns of configured rooms and their corresponding doors. (each room i have set up right now only has a single door though...)
anyway, once a door is configured the player can walk into it and it'll spit them out in the target room, at the target door, in the position of the ghostly green mascha placeholder belonging to the target door. i have to do a lot more stuff to make room loads nice & clean (some kind of visual transition and a "starting facing" for mascha are at the top of my list) but it's good to have the basics implemented.

the other thing i wanted to work on is Void's. i wanted some flexibility regarding what appears in the visible empty space outside a playable area, if there is any. i've been using the blue gradient by itself up to now, just sort of manually placed in the background of each scene. but... no longer!!! now i can load any type of prefab as a "void" to show behind all the gameplay and prerender stuff. the fact that they're just prefabs means i can do simple stuff like still images as well as more complicated programmatic stuff.

you can set a default void for each room, and you can optionally set a specific void per view as well. (as with the snowman closeup in the video at the top.) i don't think setting voids per view will be used A Lot (the potential for it being really jarring is Super High) but it's good to have the option.

ummm anyway i think thats all for now! see yo u next time